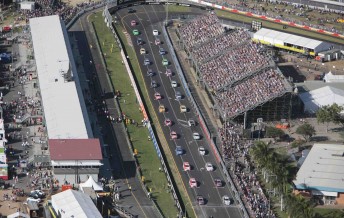 Armor All will be the naming-rights sponsor of the Townsville 400 for the next two years, and has also increased its overall involvement in the V8 Supercar Championship Series.

Armor All has secured a two-year agreement which features the naming-rights sponsorship of the successful Townsville-based V8 Supercars – the Armor All Townsville 400 – for 2010 and 2011.

Armor All replaces Dunlop, which was the major backer of the successful first event last year, attracting an attendance of 168,057 while bringing an economic benefit of around $20 million to the Far North Queensland region and winning the 2009 V8 Supercars Event of the Year.

“Armor All is very excited to extend its sponsorship of the V8 Supercars Australia until 2011, which will see our great partnership with V8 Supercars continue,” said Paul Blair, Clorox (Armor All) Marketing & Channel Manager – Automotive.

“After coming on board in 2006, we have enjoyed four seasons in the sport. V8 Supercars has proven to be a great way to market our brand, and we are looking forward to the increased Armor All involvement in our fifth and sixth season in the Championship Series.

“Now, we have taken yet another step to increase our presence in the market by supporting one of the greatest sporting events in Australia – the Armor All Townsville 400. After such a successful event in 2009, lending our name to the event was an opportunity not to be missed.”

“I’m very pleased Armor All will continue to be a part of V8 Supercars for another two years,” he said.

“Armor All is a great, iconic international brand and it’s fitting it has decided to lend its name to one of the great events on the V8 Supercar calendar – the Townsville 400.”