Fernando Alonso has driven a Ferrari Formula 1 car for the first time as part of a commercial shoot for new team sponsor Santander.

The car featured a new livery with Spanish bank Santander, which has signed a five-year deal with Ferrari. The branding was displayed on both the front and the rear wings, as well as on the car’s mirrors. The wings were painted white for the promotional exercise, but may appear different at the team’s officially unveiling on January 28.

Santander has been backing Spaniard Alonso since his Renault days in 2003-05, but the company was bound to McLaren for a three year deal, even though Alonso left the team after just one season in 2007. 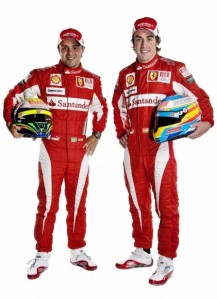