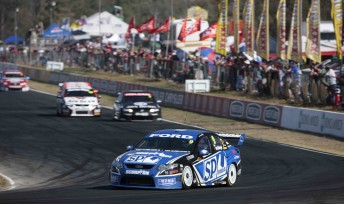 Mayor Pisasale has been negotiation with V8SA and the Queensland Government to find a way for the V8 Supercars Series to contest its scheduled May date that was cancelled two weeks ago due to a number of ongoing issues.

V8 Supercars Australia acting CEO Shane Howard today confirmed a new deal was pending but a final contract and services agreement was yet to be presented.

“Mayor Pisasale has done a great job in getting discussions to this point with his great passion for the region and understanding of the importance this event has for the Ipswich and greater area,” the acting CEO said.

“It appears that Paul is close to brokering an arrangement for this year only and we wait with anticipation the proposed contract and services agreement for a one-off appearance.

“We stress that this is a short-term fix, not a guarantee that V8 Supercars will host events at Queensland Raceway post- 2010.”

Should an agreement be finalised, V8SA is likely to promote the event in 2010.