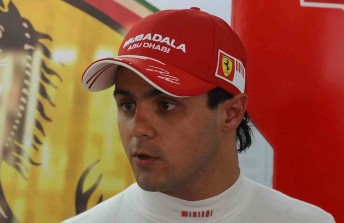 Felipe Massa will get more F1 miles in Spain tomorrow

It will be just the third time that the Brazilian has driven a Formula 1 car since he sustained head injuries at the Hungaroring when an errant spring from Rubens Barrichello’s Brawn struck him.

Massa has previously driven an F2007 chassis at Fiorano and Mugello.

Ferrari is testing at Barcelona this week, giving seven-time MotoGP champion Valentino Rossi two days of running in an F2008. According to Autosport.com, Massa will then take over the car, which is running on GP2 tyres to comply with the Formula 1 testing ban.

“As the car and the track were available I thought it would be helpful to go onto the track for a day to continue gaining confidence with the Formula 1,” Massa told Autosport.

“After the days in Fiorano and Mugello this will be a nice opportunity to get back driving on such an interesting and challenging track.”