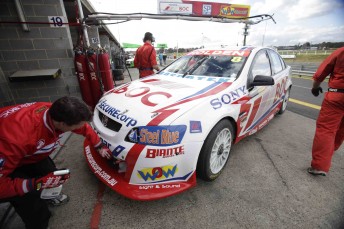 Brad Jones Racing is currently preparing the new Walkinshaw Racing-built chassis, which has sat in the team’s Albury as a spare shell for the past two years.

The 33-year-old New Zealander will get his first drive of the new car in the official Victorian V8 Supercar test at Winton Motor Raceway on February 8.

Team owner Brad Jones said that work is progressing on the car.

“It started life a our team’s spare bodyshell. It was just a spare that we were going to keep on ice, but we’ve got the opportunity to bring it on board now,” Jones said.

“We slowly started to build it up towards the end of last year and Jason is pretty keen to sit that little bit closer to the middle of the car.

“We talked about it before we had (Jason) Brighty on board, and the intention was to use it, so it’s going to be the Team BOC Commodore.”

Jones said that there is still a lot of work to be done to the car before the test.

“As I look out the window, it’s a bodyshell with a wire loom, three master cylinders and an oil tank,” he said.

“We do have a lot of work to do, but we’re chipping away at it. We’ve still got another couple of weeks, but it will definitely be ready for the test.”

Richards will continue to drive the BOC-sponsored Commodore, entered as #8. Bright steps into car that Richards campaigned last year.

The team also expands to three cars, with (still-to-be-confirmed) West Australian Karl Reindler coming on board. He will drive the chassis that Cameron McConville drove last season, and Speedcafe.com.au understands that the team will enter Reindler in one of BJR’s tradition race numbers – #21.

The three-car team will make its public launch in early February before the Winton test.