Video from the announcement can be found below this article 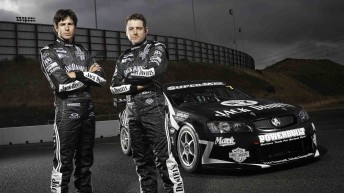 Todd and Rick Kelly have unveiled their 2010 V8 Supercars Championship Series war-paint, with the news that Jack Daniel’s has re-signing with Kelly Racing.

After competing its inaugural season last year under a one year deal with Jack Daniel’s, the Kelly Racing squad has secured an extension on its support from the iconic whiskey brand, said to be one of the ‘largest team sponsorship deals in Australian sport.’

The extension of the relationship will see the Kelly brothers race in the colours of Jack Daniel’s Racing well into the future.

Team co-owner and Jack Daniel’s Racing driver Todd Kelly said that he and the entire team enjoy a special relationship with Jack Daniel’s.

“The relationship that we’ve built with Jack Daniel’s has been awesome,” said Todd Kelly.

“To have a sponsor that is so involved with the team and is not just a sponsor, but a friend, is great for us.”

“Having Jack Daniel’s confirmed is fantastic. It gives us real security and stability and that’s incredibly important when you are building a team.

“We’ve got a long way to go, but this is certainly a massive step towards getting there.”

The team took big strides towards the end of last year’s V8 Supercar Series, taking three podium places in the last six races of the year (two for Rick at Phillip Island and one for Todd at Barbagallo).

Dual Bathurst champion and fellow Jack Daniel’s Racing driver Rick Kelly said that the team’s improved results toward the end of the year was a great incentive for Jack Daniel’s to remain on board with Kelly Racing.

“To have Jack Daniel’s show this level of support and commitment following our first year is simply awesome,” Rick said.

“We are truly lucky to have Jack Daniel’s onboard as well as lots of other great sponsors, which also highlights the job that the team has done so far.”

Michael McShane, Managing Director for Brown-Forman Australia (owners of the Jack Daniel’s brand), said that the relationship between Jack Daniel’s and Kelly Racing is “a great fit.”

“Everyone at Jack Daniel’s is extremely excited to be continuing our great relationship with Todd and Rick Kelly and everyone at Kelly Racing,” said McShane.

“Kelly Racing is a great fit for Jack Daniel’s, with Rick and Todd as key ambassadors for our brand.

“We see V8 Supercars as a great platform for the Jack Daniel’s brand and the promotion of our ‘Pace Yourself, Drink Responsibly’ message.

“We look forward to promoting our social responsibility message and our brand with the team well into the future.”

The Kelly brothers took the wraps off their Holden Commodore VE at the Docklands, Victoria, today, and will get their first test in the car at Winton Motor Raceway (February 8).

Jack Daniel’s Racing will run an interim livery at the first two events of the season in the Middle East before giving the new design its race debut at the Clipsal 500 in Adelaide on March 11-14.