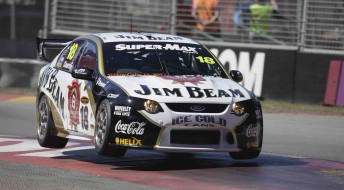 James Courtney says that his first round crash at the Clipsal 500 last year cost his team momentum and, consequently, a chance to contend for the 2009 V8 Supercar Championship Series.

The #18 Jim Beam Racing driver tagged the wall in Sunday morning’s warm-up session at the Adelaide street track last year and due to the initial incident, crashed heavily shortly after.

And after his cool-suit failed in Saturday’s race, he left Adelaide in 23rd position.

Fast-forward nine months, Courtney won the last race of the year at the Sydney Telstra 500 and finished seventh in the championship, but on reflection, he admitted that over-exuberance cost him a genuine run at the title.

“I was very eager. I was a little too excited for the year to come,” he told Speedcafe.com.au.

“After our pre-season test, I felt the car that I had that probably the best I’d had in the category.

“The first race, we had the cool suit fail, and in the next one, I clipped the wall and we did a bit of damage in the warm-up, and the weekend was over.

“As soon as it happened, I said to the guys “It’s me, sorry about that.” And once we left the track, we knew the year was going to be hard.”

With the 2010 V8 Supercar Championship Series less than a month away, Courtney says that lessons have been learnt and there’s now a simple plan in place.

“I know what we have to do to make it easier. It’s pretty simple – we need to start the year the way we finished,” he says.

“We won’t be able to win every race, sometimes you need to finish where you can, but I will be taking a slightly different approach this year.

“As last year went on, we got stronger as a team. Nothing has changed on my side of the garage, or Steve (Johnson’s) side for this year. We’ve got a lot of continuity with the guys around us.

“The team has evolved so much since Charlie (Schwerkolt) and Adrian (Burgess) got on board and they’ve brought the team to what it is – a championship challenging team. Most of the credit goes to those guys for doing what they’ve done over the last couple of years to bring the team to where it was now.

“I think the result in the last round at Sydney is a sign of things to come.”