The #19 returns to Dick Johnson Racing

The #19 returns to Dick Johnson Racing 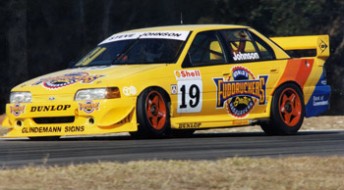 The last time a Dick Johnson Racing car competed with the #19 was at Oran Park in 1994, pictured, and in 1995 in the hands of Steve Johnson (Pic: www.djr.com.au)

Dick Johnson Racing has famously raced its Fords under the numbers #17 and #18 for over 20 years. In 2010, the team adds a third car to its stable, and has secured the only logical number for the Falcon – #19.

New team driver Jonathon Webb will campaign the #19 Ford Falcon FG, to be run alongside the #17 and #18 Jim Beam Racing entries of Steve Johnson and James Courtney.

Webb secured his ride with DJR by purchasing a Racing Entitlements Contract (the ticket to race in V8 Supercars), and to make the fit into the Queensland team numerically sound, struck a deal with Fujitsu V8 Series team Sieders Racing Team to grab #19.

The last time that DJR entered a car with #19 on its flanks was in 1994 and 1995 when Steve Johnson entered a one-off round of the Australian Touring Car Championship at Oran Park. Johnson drove a Fuddruckers Hamburgers-backed Falcon EB (1994) and a Digital-backed EF (1995) to get some extra laps before he made his endurance race debut later that year with Allan Grice and Charlie O’Brien respectively.

Webb will compete in a DJR-prepared, Triple Eight-built Falcon FG. The #19 Falcon will be identical to the Johnson and Courtney cars, although it will run a fresh KRE Engine that was sold with the car. When it’s time to freshen that engine up, a DJR-built engine will be installed to fall in line with the existing team equipment.

“Everything will be identical bar the engine, probably for the first three or four rounds, and then migrate over to the same spec as ours. Everything else is set-up identically,” Burgess said.

“The car came with a fresh engine from KRE, so once we get to the point where it needs to be rebuilt, then we’ll start putting our parts in it and making it more DJR-spec, in relation to the parts and plumbing. We’re only talking small things here, but we’ll keep that car with that engine until we come back from the Middle East, maybe Clipsal. There isn’t a significant difference.”

“I’m very happy with the guys I’ve got to bring to the track,” Burgess said.

“I’m looking forward to it. There is some really strength in the team, built on what we had last year, and engineering wise, we’ve strengthened our workforce by three people, so that will be a good thing for us.”