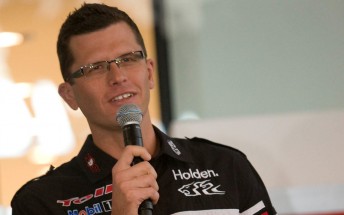 Holden Motorsport boss Simon McNamara has singled out Garth Tander as the man who will win this year’s V8 Supercar Championship Series.

The forthright Holden man told Speedcafe.com.au at today’s unveiling of the Toll Holden Racing Team’s 2010 Commodore that he’s never seen Tander as fired up for a new season.

“I think Garth will step up and come out all guns blazing,” he said.

“He’ll be solid. He’s got the eyes on this year. I’ve known him for a long time, and over the off-season, I’ve seen him comeback pretty fired up, and that’s good sign.

“I know how he operates and I know his mindset. He’s one of those guys that takes all that stuff and uses it as motivation and not as an excuse to fail, which some people in higher-level sports seem to do. Garth is nothing like that. I just know that he’ll dig deep down and push like buggery to get there. He’s on fire.”

McNamara said that the introduction of reigning champions TeamVodafone to the Holden stable is one reason why Tander wants to make 2010 ‘his year.’

“I know he’s really enjoying the challenge of having the Vodafone guys in the same branded car – obviously it’s not the same car, there are slight technical differences between the Walkinshaw and Triple Eight cars,” he said.

“(But) he’s really looking forward to the challenge.

“He’s happy with the fact that he has a co-driver that is taking it to him. The team is now taking an extra stride and pushing much harder. It’s great to see that.”

The first-look of the Toll HRT Commodore features a traditional ‘red’ colour scheme, ditching the day-glo look it has competed with since 2007. Team leader Tander was the MC of the launch, which celebrated the Holden Racing Team’s 20th anniversary in the sport.

For more with McNamara, CLICK HERE for Speedcafe’s Café Chat