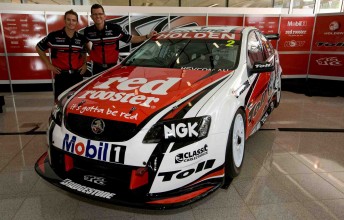 Will Davison says that if his 2010 Toll Holden Racing Team Commodore VE goes as fast as it looks, he’ll be the series champion by the end of the year.

The 27-year-old, who finished second in last year’s V8 Supercar Series, told Speedcafe.com.au at today’s unveiling of his the factory Holden team’s 2010 look that he has “a feeling” about his chances this year.

“Generally, when I see my new race cars for the first time, I get a feeling whether it’s going to be fast or not judging by it’s looks. This one gives me a good feeling,” he said.

“The look of the car doesn’t really mean anything! But I think it looks fast!”

Davison said that he likes the “mean” new look to his HRT racer.

“It’s a big change in livery. It’s still a mean looking HRT car. It’s pretty aggressive looking car. I like the extra white on it, and good to go back to the standard red, rather than the day-glo.

Davison also made mention of next year’s HRT scheme, noting that he wants one thing to definitely change – the number on the window.

“That’s going to be in next year’s livery!” he said.

“I need to make sure that those yellow things on the windows has just one figure in it for me. That’s what I want …”