Davison to get brand-new IRWIN FG

Davison to get brand-new IRWIN FG 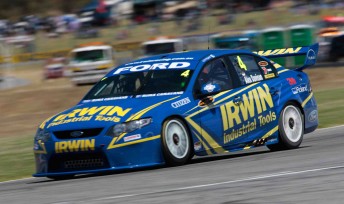 Alex Davison will debut a brand-new IRWIN Racing Falcon FG at the fourth round of the V8 Supercars Championship Series on the streets of Hamilton, New Zealand, in April.

Davison will start the 2010 season with the chassis that he used last year – the first FG built by Stone Brothers Racing – before switching to the new #4 Falcon.

Team owner Ross Stone told Speedcafe.com.au that there is no need to hurry the introduction of the new car – hence its April debut.

“We don’t need to rush it. If we though that it was going to be faster, we’d use it straight away, but you could keep building new cars all the time,” he said.

“All three cars that we ran last year have been put on our chassis jig and there’s been a few bits and pieces of development done. They’ve all been repainted and being prepared for the launch on the 29th (January).

“Hamilton looks like the place it will be debuted. With the way that races are these days, you need to have your spare chassis pretty well ready to go.”

Stone says the team’s chassis dyno fast-tracks the development of all new cars, also helping to get the new cars up to speed as quickly as possible.

“Any little gremlins you have, you should pick up and be ready to go. You can’t afford to have any down time with the new car, plus we’re allowed a 20 lap car with a brand-new car these days, which helps to iron out any bugs.”

The new IRWIN Tools Falcon will make increase SBR’s fleet of FG Falcons to four. When Davison gets his new car, his current shell will be used as the team’s spare. Shane van Gisbergen will drive the FG that debuted at Sandown last year and new team driver Tim Slade will pedal Jason Bright’s ex-Fujitsu car.

Davison will be engineered by Dave Stuart this year, who worked with Bright’s SBR-prepared entry late last year.