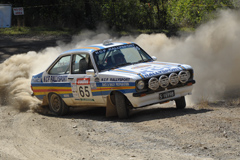 Classic rally cars will be back for the 2010 ARC

Some of the great cars of yesteryear will be back in action at selected rounds of the Australian Rally Championship in 2010.

ARCom (Australian Rally Commission) and ACRA (Australian Classic Rally Association) have combined to run Classic Rally Cars in a closed to Club format prior to the first ARC car hitting the stages as well as extensive displays for the public.

Of the cars set to appear is the famous Ford Escort RS-1800 of multiple Australian Rally Champion Greg Carr along with Escorts from Ross Dunkerton and Keith Callinan.

Darryn Snooks, President of ACRA has led the charge of the Classics in Australia and New Zealand with his Classic Stanza team and has supported the category for many years.

“I am thrilled that many will now see Classic Rally Cars at the head of the field in the ARC,” said Snooks. “These cars represent the very fabric of over 40 years of continuous competition in the ARC and spectators will see some great cars from yesteryear put on a fabulous show.

“There are a number of new classic cars being built by prospective competitors including BDA Escorts, Nissan 240RS, Stanza’s and even a Renault Alpine A110. Support is growing rapidly for the category.”

The New ACRA initiative is part of the general resurgence in Classic rallying all around the world.

“The Australian Rally Championship has a rich heritage and these classic cars will revive fond memories of a time in rallying where legends were made,” said ARC Chairman Ben Rainsford.

The opening round of the 2010 is the 30th anniversary tarmac Rally Tasmania based in Burnie from 26 to 28 February.