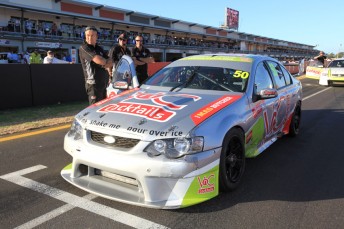 McElrea Motorsports is close to securing its driver for the 2010 Fujitsu V8 Supercars Series.

Team owner Andy McElrea told Speedcafe.com.au that six drivers currently remain on his list of potentials, with one stand-out contender emerging as the favourite.

David Russell, who finished third in last year’s Fujitsu V8 Series, is the man in the box seat to get the drive, although a deal is not in place yet.

“We’d like to get it done as soon as possible. We’re no different to anyone else in that respect. Sooner rather than later would be good,” he said.

“Bare in mind that we could go testing in three weeks from now if the deal is done.

“Three of the guys that we are talking to are all potential race winners and we’re definitely focused on having a driver that can win, rather than rushing into signing any driver. We want someone who can take race wins and contend for the championship.”

There is a chance that McElrea Motorsport could enter two cars in the series as well, if the right deal can be found.

“We are equipped now with what we’re doing in our workshop and infrastructure wise, we’re totally ready to run two cars, but if it’s only one car, that’s fine too,” he said.

The team ran Daniel Gaunt last year, and despite missing the final round of the series at Sydney Olympic Park, Gaunt finished his debut season in fifth place.

Besides the team’s entry in the Fujitsu V8 Supercar Series, the team will run two cars in GT3 Cup Challenge for Bob Thorn and Asian driver Yuey Tan, plus a single-car in the MINI Challenge.