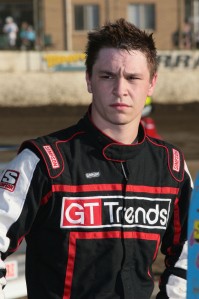 Kevin Swindell became the youngest winner of the Chili Bowl in it's 24-year history this weekend. Pic: Paul Carruthers

Young gun Kevin Swindell captured the biggest win of his flourishing career over the weekend when he took out the Lucas Oil Chili Bowl Nationals in Tulsa, Okalahoma.

In an event that once again attracted many of the top line drivers from a variety of motorsport disciplines, the 20 year-old became the youngest winner in history when he took the chequered flag ahead of Cole Whitt.

Kevin’s famous father, Sammy, a five-time winner of the famous Midget event, used a champions provisional to start the main event from 25th before slicing his way to third place.

After pole starter Darren Hagen and Cory Kruseman both enjoyed stints at the front of the field during the early running as Swindell dropped to as low as sixth place. By lap 20 Kevin Swindell was starting to show his card and took command just after to the midway point of the 50-lap event.

The younger of the Swindell’s then survived a late caution in the hotly-contested affair that gave both Whitt and a rallying Sammy Swindell one last opportunity at the victory, however, there was no denying the rising star of this victory.

“I lost my brakes on Lap 10 and I didn’t think I had the car to win with 15 laps to go but I was committed to stay on top and it worked out,” said Swindell.

“The cushion was pretty tricky and I was just trying to be as consistent as possible and not make a mistake and throw it away.”

Throughout the race Swindell was keeping an eye on his father’s progress through the field, who despite having to go to the rear on two occasions after being involved in tangles was still in contention over the closing stages.

“With ten to go I saw he (Sammy) was sixth, and then on the green-white-checkered I could just tell by the crowd that he was coming,” said Swindell.

Crashed out of an automatic starting spot in Wednesday night’s premilinaries, Sammy Swindell was added to the 25-car field on a provisional as a former winner. Many of the soldout crowd of 13,000 booed the World of Outlaws star as he was introduced but they were standing and cheering his charge at the end of 50 laps.

“I never get too excited about finishing third in any race but this was kinda different and real special since Kevin won it,” said Swindell.

“It didn’t start out real good and I never really got to run where I wanted until the end. But this was Kevin’s night and his biggest win yet. I think he’s now the youngest guy to win a WoO race and this place.”