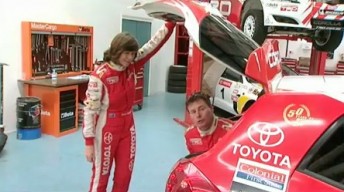 The television ad features the four-time Australian rally champions singing and performing to a 23 second commercial, featuring their Toyota Corolla at their Canberra-based workshop.

Speedcafe.com.au isn’t sure if the pair have a future in television acting or stage performing, we think they’d be best sticking to the forests and tarmacs around the country where they’ve had most of their success. However, on an Australian rallying front, it’s encouraging that the pair were selected to be involved in the production.