Perfect weekend for Farr at Parramatta

Perfect weekend for Farr at Parramatta 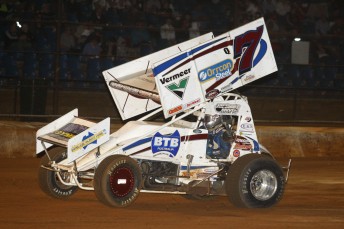 East Coast Pipelines Racing’s Robbie Farr has continued is return to form with a perfect weekend during round 11 of the Performance Wholesale World Series Sprintcar Championship this weekend.

Farr’s victory in last night’s A-Main event at Tyrepower Parramatta City Raceway was his second in a row in the series and his sixth of the 2009/10 season at the Sydney venue.

After starting from pole position for the 30-lap feature Farr slotted into second place aboard the Orrcon-Steel backed entry behind American Jason Sides.

When Sides missed his marks exiting turn two on lap three Farr pounced to take over the race lead.

From that point he was never challenged and drove away with the victory, just like he did during the preliminary night’s action on Friday.

“It doesn’t get much better than clean sheeting the weekend with setting quicktime, winning the prelim A-Main and then the main event.

“One of the most pleasing things over the weekend is the fact that the track surface was completely different on both nights and we won on both of them. It was just one of those weekends where everything was perfect and the results came our way, they say wins breed wins – hopefully this trend continues.

“In last night’s main Sides was working the middle and I was on the top, it took a couple of laps to find where my car was working best and once I got into my rhythm it all fell into place.”

Sides drove a strong race to hold on to the runner-up spot ahead of Ian Madsen.