Davison: Getting a ‘Techo’ advantage

Davison: Getting a ‘Techo’ advantage 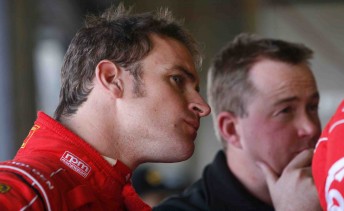 Will Davison will team with 'Techo' (right) this season

Toll Holden Racing Team’s Will Davison says that having Garth Tander’s long-time engineer by his side will help him go to the next level in the V8 Supercars Championship Series.

Davison told Speedcafe that from a personal point of view, he is very comfortable with the new arrangement.

“I was obviously very happy to continue on with Alistar, but on the same token, I can definitely see the merit in shuffling things up,” he said.

“Techo is a guy that I’ve known for a long time – since the days at Gibson Motorsport when Garry (Dumbrell) owned the team and I was a school mate of Paul’s.

“When I first arrived in the series, Techo was my first point of reference. He was a familiar face.

“We get along really well. With my inexperience at the team and in general, he’s probably a character that will suit me very well. Personally, it’s going to be fantastic.”

Davison said that the importance of the driver/engineer relationship is the difference between winning and losing.

“Techo is the sort of guy who will be able to get what he needs out of me,” he said.

“Either way, I would like to think I’d be in a winning position anyway. You grow every year and this year, I’ve got to step it up another level. This is just part of the process to find that last little bit.

“At the end of the day, it’s a people sport, it’s a communication sport, it’s a interaction sport in the way that you get along with your team – particularly your one-on-one relationship with your engineer.

“If you can find that magic ingredient, it can do magic things on the track.

“With me being relatively new to the team, that experience from Techo and direction he will be quite beneficial, give me answers and get to where we need to get quicker and more fluently.”

Davison says the combination of Tander and McVean will find their feet together quickly.

“Garth knows what he wants in the car. He’s very cultured in what he needs out of the car,” he said.

“Garth and Al will be able to come up with fresh idea. Garth and Techo worked together for a long time, so it’s going to spice it all up. Al’s very smart and they’ll come up with new ways to do things.

“We’ve still got each other there very close if we need to work one and other. Whether it’s looking back on information from last year, it’s all there still. This is just away to keep everyone on their toes!”