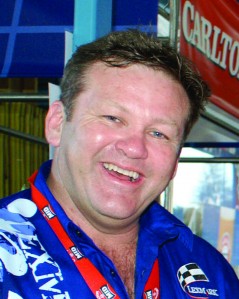 Geoff Jones will become both a partner and director of Sports and Entertainment Limited (SEL) – the company which owns 25 percent of V8 Supercars Australia.

Jones, the current CEO of Ticketek, will take up his role on April 1 this year.

It’s the first major partnership change at SEL in its 13 year history.

Jones brings with him a wealth of experience and expertise, having worked in senior positions at IMG, the Foster’s Group and Ticketek.

He is also regarded as the best CEO in the history of the Gold Coast street race event and could be a great asset to V8 Supercars Australia if it is able to play a greater off-track role in the Gold Coast event. The Queensland government is currently working through who will guide the October race weekend into the future.

Jones has also been mentioned in the past as a candidate for the V8 Supercar CEO role in the past, but it is believed he rejected the offer.

Jones is well regarded in the motorsport world, especially in V8 Supercar land and the timing of his position will coincide perfectly, considering that newly-announced V8 CEO Martin Whitaker will take up his position at V8SA on the same day.

Jones said that he is looking forward to the opportunity of being a part of the SEL team.

“I have long admired the way SEL has gone about their business and the market position and success they have created,” he said.

“I look forward to joining with my new partners and the team at SEL to help grow the business even further.”

SEL CEO James Erskine said that Jones is one of the first steps to expanding the SEL business.

“This is an exciting development for SEL,” he said.

“We are in a significant expansive stage and Geoff will be a valuable asset and partner in our business going forward. He is the first new partner to join our business in our history and we are very much looking forward to Geoff coming on board.”