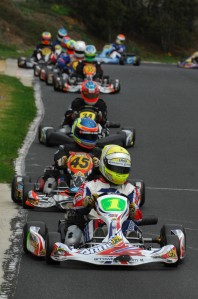 Current Clubman Heavy National Champion Matthew Wall will start as one of the favourites for this weekend's event. Pic: photowagon.com.au

Wall, the current Australian Clubman Heavy Champion, will start as one of the favourites for the event to be held at the venue where he took out the Rotax Heavy crown last September.

He is joined in the 57-driver strong entry list by the likes of Sydney stars Jason Hryniuk, Troy Hunt, Nick Agland and Daniel Baker along with young gun Tyler Greenbury from Toowoomba, Western Australian Steven Scoble and Bundaberg’s Kel Treseder.

Also entered in the event is Farley’s son, Troy, who is making a rare appearance back behind the wheel of a kart. The 30 year-old has spent the majority of his time since retiring from full-time racing building kart engines for many of the country’s top drivers but he will be racing in honour of his father this weekend.

“It’s honour for the family to have such a great field assembled in honour of Dad,” said Farley.

“Karting meant the world to him, it was simply his life, I’m looking forward to getting back behind the wheel of a kart and racing against the best there is going around. Hopefully I can be competitive and be up near the front all weekend.

“I’d like to thank the North Shore Kart Club for making this event possible along with the karting community from across the country that continue to support the event.”

The action in the Memorial event is set to be action-packed with 57 drivers vying for the 40 positions on offer in the racing. After qualifying the fastest 35 drivers will proceed to the heat races with the remaining qualifiers required to contested a last-chance repecharge race over 16 laps where the top five finishers will proceed to the heat races.