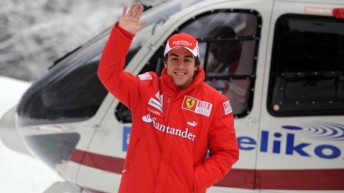 Fernando Alonso has appeared for the first time as an official Ferrari driver at the famous Italian team’s annual press event at Madonna di Campiglio in Italy.

The ski camp is the first time that the two-time Formula 1 champ donned his red Ferrari team gear.

Alonso will get his first drive of a Ferrari F1 car at Valencia at the start of February.