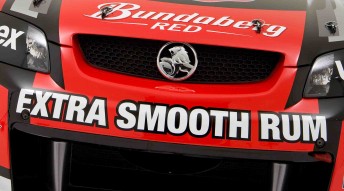 Bundaberg Red Racing will be known as ‘Extra Smooth Racing’ in the opening two rounds of the V8 Supercar Championship Series at Abu Dhabi and Bahrain.

Due to strict laws on alcohol advertising in the Middle East, ‘booze-branded’ cars will not be able to promote their companies.

“It’s a challenge, but at the same time, it gives you the opportunity to reflect the attributes of the brand that you’re promoting,” he said.

“Extra Smooth Racing works well, so in that respect, it’s good for us, good for Diageo and Bundy.”

Bundaberg Red Racing is currently working on the final details of the artwork.

“We’ve enquired about different aspects of the artwork to see what can be used and what can’t,” Stewart said.

“V8s has been really helpful investigating with the right people in the Middle East so we don’t get over there and find out that we’ve over stepped the mark or offended anyone.

“The key is to do it right and to have a strong message for the team without over stepping the line.”

V8 Supercars is assisting the alcohol-supported teams financially for the two races. Besides the decals on the side of the cars, team gear and apparel needs to be de-branded.

As reported previously on Speedcafe, Jim Beam Racing will run ‘The Team’ as the major decals on its two cars.