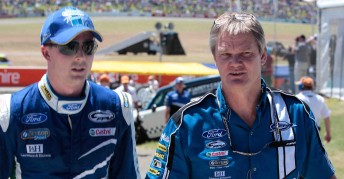 Mark Winterbottom says that he will be more comfortable in this year’s V8 Supercar Championship Series with renowned engineer Campbell Little calling his shots.

The Orrcon Steel Ford Performance Racing driver had Phil Keed engineer his #5 Falcon in 2009, but told Speedcafe.com.au that they didn’t “gel” as a combination.

Keed has left FPR to reunite with Jason Bright at Brad Jones Racing, opening the way for Little to engineer Winterbottom this year.

Little will double as the team’s technical director, having worked with the factory Ford outfit in the latter half of last year’s championship.

Winterbottom acknowledged that Little is a better fit for him.

“I’ve always had a good relationship with him,” he said.

“Every driver’s different, and we all need different things. Last year with Phil … Phil’s a really good engineer, but we didn’t real gel like we should have. Jason Bright and him have always have got along.

“In the car, I don’t like to talk much on the radio, and things like that, and even when I’m in the car, I struggled a little bit with the way the relationship was.

“With Campbell, he knows exactly what I want and what I’ve been used to since we started.”

It is a reunification of sorts for Winterbottom and Little. The pair worked together during Winterbottom’s title-winning year with Stone Brothers Racing in the Development Series in 2003. Little also engineered Marocs Ambrose that year, who won the V8 Supercar Championship Series.

FPR’s ‘dream team’ driver/engineering combination got an initial hit-out in the team’s final test day at Winton late last year, and ‘Frosty’ says that the benefits were instant.

“We had a test at the end of the year and put his set-up on the car and it felt really quick straight away,” he said.

“From my point of view as a driver, I need him to take me to the next level, and hopefully he can do that.

“What Campbell can bring is competitiveness from February to December. That’s probably the bit that we’ve lacked in the past. We’d do good at some tracks and not good at others. For 12 months, we need to be good. The way the car was at Winton at the test, he instantly improved our weaknesses.”

In total, Little has been associated with four main series champion teams (Stone Brothers Racing in 2003-05 and Triple Eight Race Engineering in 2008).

The pair will work together on-track for the first time this year in the official V8 Supercar test at Winton Raceway on February 8.

Speedcafe.com.au broke the news that Winterbottom and Little will team up in 2010. CLICK HERE for last Thursday’s story