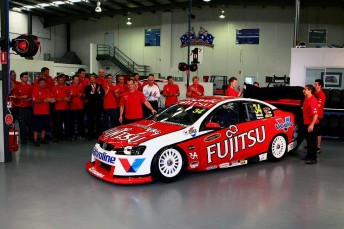 Experienced Holden engineer Richard Hollway has been poached from Walkinshaw Racing by Garry Rogers Motorsport and will act as the team’s head engineer in 2010.

Hollway (known a s ‘Crusty’ in the industry), a long-time member of the Holden Racing Team and Walkinshaw Racing outfits, will inject an experienced hand to the team, which is predominantly made up of younger staff – in keeping with team owner’s Garry Rogers youth policy.

Holdsworth, driver of the #33 Fujitsu Raciung Commodore VE, told Speedcafe.com.au that Hollway’s employment at GRM is a huge coup for the Victorian-based team.

“It’s what we need to move forward,” he said.

“I think the team needed this a lot longer than what I’ve been there, so I think this is going to be an enormous outcome for the team to move forward.

“I been trying to get someone of his calibre to come to our team for a while, and this was the right time and we’re absolutely over the moon that we’ve been able to 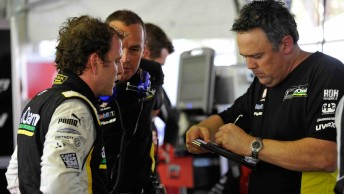 Richard Hollway (far right) has worked for the crack Walkinshaw operation in the past. Pictured above with Paul Dumbrell and Erik Pender

do it and get someone of that level of experience.

“Richard will act as the head engineer and heading up the engineering department. We haven’t finalised the race engineering side of it yet, but at the stage, he’s taking control of that side of things.

“He can really help direct the team in the right sort of path.”

Holdsworth, who finished 10th in last year’s V8 Supercar Championship Series, admitted that GRM has lacked an experienced hand on the engineering front.

“What we’ve been lacking in the past is simply through experience,” he said.

“We’ve got some really smart guys in there, but we just haven’t had the experience to point us in the right direction and make sure we’re putting the money in the right sort of areas and developing the right components to make us go faster.”

In other news, GRM is currently looking for an experience mechanic to fill a vacant role at the Dandenong-based team.

GRM is currently building a new car for the 2010 season. It is expected to debut at the start of the ‘Australian’ season (Clipsal 500), although the start date may be pushed back.

“We’re still building that the moment,” he said.

“The fabricators are hard at work there and I think the plan is to try and make it out for Clipsal, but we’re in no real rush. The current cars aren’t too shabby, so a couple of tweaks here and there and we’ll have them on the pace.”