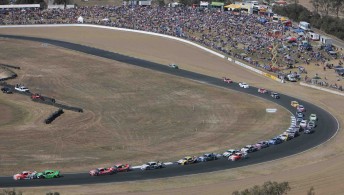 V8 Supercars announced last Thursday that the Queensland Raceway round was off the 2010 calendar. Could the race at 'The Paperclip' be saved?

The Ipswich City Council and the Queensland State Government have outlined plans to rescue the V8 Supercar event at Queensland Raceway after it was announced last Thursday that the round was off the calendar.

Ipswich Mayor Paul Pisasale will kick-start a comprimise between V8 Supercars Australia and QR operator John Tetley to solve the issues that the parties are disputing and save the event for the region.

Mayor Pisasale told The Courier Mail that the Queensland Raceway event, which was scheduled for May this year, is “worth saving.”

“I’m working with Sport Minister Phil Reeves and I’m quietly confident we can come up with a solution so that V8 fans will not be disappointed,” he said.

“People have booked their holidays to coincide with this event; it’s the only V8 circuit event in Queensland. The others (Townsville and Gold Coast) are street events, so it’s worth saving.”

The Minister confirmed he was working with the Mayor on a resolution to the impasse.

“The State Government welcomes any event that generates jobs and economic benefits for Queensland,” Mr Reeves told The Courier Mail.