In the late 90s, Wayne Wakefield was regarded as one of Australian touring car’s most exciting prospects.

It wasn’t too long until he was advancing through the ranks. He entered a couple of events in the Super Touring Championship before taking on V8 Supercars. He made his debut at Bathurst in 1999, sharing a Commodore with Dean Canto. The pair failed to finish when Canto was dispatched into the wall on the approach to The Cutting.

At Bathurst that year, he teamed with fellow Konica V8 driver Ryan McLeod, but just three laps into Wakefield’s first stint, he was picking his Chico-sponsored Commodore out of the wall.

In 2001, Wakefield entered just one round of the Konica Series, finishing second at Lakeside.

And that’s where his big break came. After Greg Crick failed to impress the Stone Brothers Racing team at the Queensland 500, Crick was given the flick, replaced by Wakefield for ‘The Great Race.’ 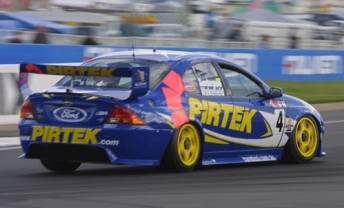 Wayne Wakefield drove with Marcos Ambrose in the 2001 Bathurst 1000

To ensure Wakefield was race ready, he drove in the non-championship Konica race, where he qualified on pole and won the race.

For the main race, Ambrose qualified on pole as well, making Wakefield the only person in V8 Supercar history to start both V8 races from the top spot on the same weekend!

The main race didn’t go so well for the pair, expiring after 42 laps.

In 2002 and 2003, Wakefield didn’t compete in the Konica Series, but teamed with Paul Morris Motorsport in the endurance races. With Morris in 2002, the pair failed to finish, and then in 2003, Wakefield and Andy McElrea did not qualify.

To date, that was Wakefield’s last attempt at the Bathurst 1000.

He raced in the majority of the 2004 Konica Minolta V8 Series, finishing 12th overall – including a win in the reverse grid race at Mallala.

So, after being on the brink of success in the early 2000s, what happened to Wayne Wakefield? Speedcafe spoke to the Brisbane-based nightclub owner, who is as keen as ever to get back into motor sport.

“The reason I’ve fallen off the racing radar is that I haven’t had rich parents or a bottomless cheque book to fall back on,” he said.

“I had to fight tooth and nail to get where I got to.

“I miss it. I still train every day I reckon I’m fitter and lighter now than when I was racing. I still think about it every day. I make the odd phone call here and there. I just need a budget and car and I will win races – I promise!”

Wakefield says that he has three career highlights.

“I reckon the day that David Besnard and I tried to kill each other around Lakeside in the Konica Series (2000) for 10 laps straight – that was awesome.

“Another highlight was racing at Bathurst for the first time in 1999 with Dean Canto.

“And of course, when I drove with Stone Brothers and I started both races from pole position. A lot of people still remind me of that …”