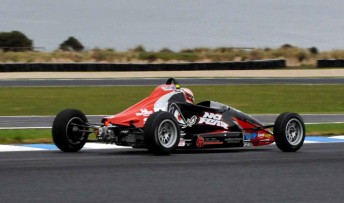 The collapse of the Queensland Raceway round has left the three of V8 Supercars’s support categories with a calendar quandary.

Fujitsu V8 Supercars, Formula Ford and MINI Challenge were scheduled to host rounds of their championships at the Ipswich track.

The most obvious refuge for the classes is V8’s Phillip Island 500 round in September, however, the switch isn’t as easy as it seems. The L&H 500 at The Island already has V8 Utes, MINI Challenge and Australian Superbikes locked in, and with the extended V8 format, little room remains on the weekend’s schedule.

The Fujitsu V8s have already got rounds scheduled for Winton and Sandown, which would make three of its seven rounds in Victoria.

According to Fujitsu V8 Series co-ordinator Damien White, that situation isn’t ideal, but FV8s preferred option is to maintain a seven round series.

“We recognise the importance to the teams and sponsors that the Fujitsu V8 Supercars Series is a seven round series,” he said.

“We’re currently looking to see if there is a way we can replace the round we just lost.”

Likewise, Formula Ford must be kept at eight rounds to satisfy its ‘championship’ status. Its replacement is likely to be dictated by V8 Supercars Television, and category manager Margaret Hardy said that a decision may be some time away.

“I’ve only had less than 12 hours to do anything about it, so at this stage we’re unsure of what our preferred solution will be.

“If we can’t be accommodated (by V8 Supercars), then we might have to think of other options.”

MINI Challenge is already scheduled to race at Phillip Island, and administrator Craig Denyer could not shed much light on the issue.

“MINI Challenge is looking at possible options with V8 Supercars at the moment,” Denyer said.

“Until we go through what those options are, we can’t make any comment.”

A fall-back alternative could be with the Shannons Nationals championships. Speedcafe spoke to series boss Rob Curkpatrick, who said he’d be happy to speak to any class in need of a round.

“We’ll accommodate whoever we can at any round,” he said.

“We’re always here to help. Apart from Wakefield Park, we’ve got a fairly busy program. We’re here for the benefit of national motorsport.

“Our program is nearly full, but there are a few places that we could make some space, but we’re more than happy to talk to them.”