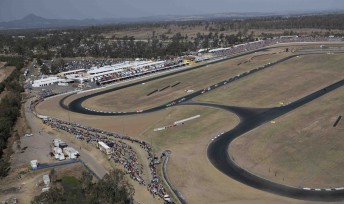 Queensland Raceway has been dumped off the V8 Supercar calendar

The 2010 V8 Supercar Championship Series will be one round shorter in 2010 after the cancellation of the Queensland Raceway event.

Despite being prepared to promote the race itself, V8 Supercars Australia today confirmed that it has been unable to reach a satisfactory hire and commercial terms with QR operator John Tetley and that the proposed May date has been axed from the calendar.

A V8 Supercar spokeperson told Speedcafe.com.au that a replacement round is very unlikely and that the series will be contested over 14 rounds, with one non-championship race at the Australian Grand Prix.

In a scathing statement, V8SA and Tetley were unable to reach an agreement in what V8’s termed a “long list of unrealistic demands” including a near record track hire fee, as well as insiting that the venue would not be responsible for obtaining the very necessary CAMS licence that is required under the FIA’s sanctioning of V8 Supercars as an International Series, amongst many other items.

Combine these issues with the aging facilities and a drop off in spectator and corporate attendances and the Ipswich venue has been deemed no longer viable to host a round of the V8 Supercar Championship Series.

“This is extremely disappointing for all our fans but we had given QR a very reasonable offer and we have to be responsible to our teams when we hire venues and conduct events,” said Shane Howard, acting CEO for V8SA.

“The unrealistic hire fees and un-commercial terms demanded by QR, when compared with other permanent venues, are absurd given the standard of the QR infrastructure for fans and teams alike.

“QR’s reluctance to be a CAMS sanctioned venue further compounds a very difficult position for us as we are a fully fledged FIA Championship. Almost no money has been spent on fan facilities at QR in the last eight years despite our ongoing requests and it is now looking very tired from a fan and corporate point of view.”

V8 Chairman Tony Cochrane added that he says it’s now time for V8 Supercars and the Queensland Government to look at creating its own permanent facility.
“We do question how a venue which was built with significant State Government funds and is leased on Ipswich Council land can manipulate groups such as ours,” Cochrane said.

“Every year dealing with John Tetley turns into a greater nightmare for all of us in the Championship and I totally understand V8SA getting to this very frustrating point. With so many V8 Supercar teams headquartered in SE Queensland we now need to focus on what we can do for the future.

“Maybe the time has come for us to work with the Queensland Government and jointly build our own permanent facility to ensure the nearly 1,000 jobs in our great industry are keep here in SE Queensland.”

Speedcafe spoke to John Tetley today, but was unavailable for comment.

Queensland Raceway held its first V8 Supercar meeting in 1999 and has been a fixture on the calendar every year since – including a two-year spell when it hosted two rounds (1999 and 2000).

The loss of QR off the calendar comes as a major blow to almost half of the V8 Supercar teams. Triple Eight Race Engineering, Stone Brothers Racing, Dick Johnson Racing, Paul Morris Motorsport and Triple F Racing use QR as their testing facility.

One of the other knock-on effects of the fall-out is the three support categories which had listed provisional dates at the QR track. Fujitsu V8s, Formula Ford and MINI Challenge all now face finding new venues to replace the round.