Thompson expects to run in the top 10

Thompson expects to run in the top 10 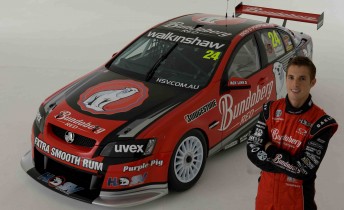 After a stop-start V8 Supercar career, the 22 year old is relishing his best opportunity yet in the V8 category.

Thompson started his V8 Supercar racing in 2006 with Dick Johnson Racing, winning the final two rounds of that series. He moved to Howard Racing in 2007 where he had mixed results before pulling out of the series. The Queenslander drove full-time for PWR Racing in the team’s last V8 main series season, before sitting on the sidelines last year. He drove with Tony D’Alberto in The Bottle-O Racing Commodore at Phillip Island and Bathurst, finishing 10th at Mount Panorama.

Thomposn was in line to drive The Bottle-O car full-time this year, but a late switch saw Paul Dumbrell take that seat, with Thompson finding a home at Walkinshaw Racing’s Bundaberg Red team.

He told Speedcafe.com.au that he is keen to not only prove his worth in the series, but regularly mix it with the leading contenders.

“In 2008 with PWR, I was in the low 20s, pushing towards top 15, and I feel with this team, the car and the engineers we have here, I think that top 10s aren’t an unrealistic goal. It’s not going to happen first race out, I’m realistic with that, but once everything is settled, it’s something that I can achieve.

“If all goes well, I want to be higher than that as well. I don’t like setting goals, but that’s where I want to be.”

Thompson will make his race debut with the team in the first round of the series at Abu Dhabi – a brand-new circuit for all V8 Supercar drivers. Having been out of a regular drive for over a year, he says that a new track will mean an even playing.

“It’s a benefit for me in that it’s anew track for everyone. No one has been there before,” he said.

“I’ve been out of the game for 12 months, so to come back and have that as the first round is quite a good scenario. I’m hoping that it plays to my advantage, compared to going to a track that everyone’s been going to for the last 10 years.”

Thompson’s drive with the team means a relocation from the Gold Coast to Melbourne. He says the past week has got his head spinning.

“The last couple of days have been pretty hectic with studios photos (Tuesday) and the launch (Wednesday),” he said.

“The next two months will be pretty crazy as well with the build up to testing – that’s only three weeks away – and then we basically jump straight on a plane and go to Abu Dhabi and Bahrain. We’re away for half of February, and then straight after that, we’re racing nearly every two weeks.

“It’s pretty full on all the way up until July, but I’m looking forward to it. I’m looking forward to getting in the car, being associated with a great team and Bundaberg Red. It’s a massive opportunity for me to be in the right situation and hopefully the people around me will be able to get the most out of me as a driver.

“It’s a great car and it will allow me to show my full potential.”