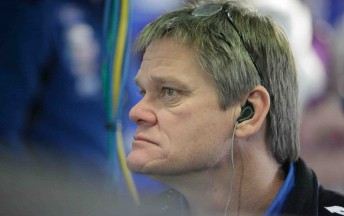 Ford Performance Racing has confirmed that it will attack the 2010 V8 Supercar Championship Series with a ‘dream’ driver/engineer combination.

Campbell Little will be the race engineer of Mark Winterbottom’s #5 Orrcon Steel Ford Performance Racing Falcon – the entry which stands out as the Ford factory’s big hope this year.

Only 10 Ford Falcons will be in this year’s V8 field, taking on 19 Holden Commodores.

Just on sheer numbers, Holden look to have the edge, but FPR team principal Tim Edwards said that he hopes his “dream team” has what it takes to challenge for the title.

“People with Campbell’s skill are not grown on trees. It’s a very small industry in this country, and there aren’t many people with his caliber of expertise,” he said.

Little replaces the outgoing Phil Keed, who left FPR at the end of last year to join Brad Jones Racing.

The respected engineer has worked successfully in the past with Stone Brothers Racing and Triple Eight Race Engineering. Little was part of SBR’s ultra-successful era with Marcos Ambrose, before heading to Triple Eight, helping the team to its first V8 title in 2008.

Last year, he took on the role as V8 Supercar’s Category Technical Director, but resigned from his position six months into the job.

Campbell joined FPR in the latter half of 2009 to oversee the factory Ford team’s operation, while also working with fellow Ford-backed team Stone Brothers to try and develop a better working relationship between the two teams.

Little is now a full-time FPR staff member, although he will continue to split his time between working from home and operating at FPR’s Campbellfield, Victoria, facility.