Schatz banks another $50k at Parramatta

Schatz banks another $50k at Parramatta

NASCAR Legend Tony Stewart has a blast Down Under 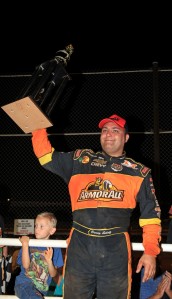 Schatz fought hard for tonight’s victory after starting from eighth spot, due to the inversion for the top eight seeded drivers in the event. After a three-way battle for the minor spots with his team-mate Tony Stewart and fellow American Tim Shaffer in the early part of the race, Schatz took the lead from Danny Smith with 17 laps remaining by using a sensational outside pass.

The North Dakota native showed true class to pull away from his pursuers and, despite a late-race caution which bunched the field, Schatz showed superior speed to take the win.

“Eight is really just a number, we did our jobs right today. We spent a little bit of time with the race car changing a few things and I can’t say enough about these guys in the team for their hard work and dedication,” said Schatz.

“It’s been pretty cool to have Tony (Stewart) as my team-mate, it’s unfortunate it has got to come to an end here at Parramatta, but all good things must come to an end.

Shaffer and Tatnell were both the big movers late in the race to claim the minor positions ahead of Americans Jason Johnson and Smith. Rounding out the top 10 was the Madsen brothers, Ian and Kerry, Ryan Farrell, Robbie Farr and Max Dumesny.

Stewart, who combined a Christmas holiday with four events at the Parramatta venue, set the fastest time during yesterday’s preliminary night’s action before lining up on the outside of the front row in tonight’s main event.

The two-time NASCAR Sprint Cup Champion was running inside the top three for the opening half of the race before a deflated right rear tyre put an early end to his Aussie campaign. 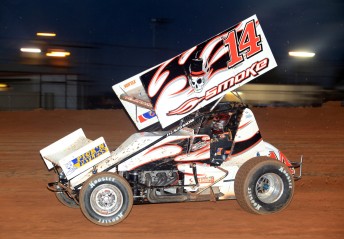 Despite not finishing tonight’s race, Stewart indicated that he had thoroughly enjoyed his time in Australia, which included watching the famous Sydney fireworks on New Year’s Eve.

“The highlight for me has been being here at Parramatta. Being at the racetrack is what I enjoy, I’ve been looking coming here for a few months. Away from the racetrack New Years Eve, seeing the Harbour Bridge and the fireworks was very cool and definitely the highlight,” said Stewart.

“We got better every night, so that was the biggest thing for me. It was nice to actually run the same track four nights in a row versus a race here and race there in a sprintcar.

“I’ve had a great time and I’m already trying to work on coming back next year.

“I was terrible the first night I was here, I was all over the place, the second night was a little better but not much. The last two nights, we got going. Tonight I got going, I don’t think I had enough to beat Donny but I think we had a shot to make it a one-two for Garry (Rush).

“I got more confident as the week went on and we worked on what I liked in the car compared to the way Donny likes it. I think we really started to hit on with what I like and hopefully we’ll bring that knowledge back next year.”

American Jason Sides put on a real show for the fans throughout tonight’s action transferring from the C-Main to gain a start in the B-Main before climbing up to 11th from his 24th starting position.