The Clayton-based team, part of Walkinshaw’s four-car empire (including the two factory Toll Holden Racing Team Commodores), will run without Holden logos across the windscreen, instead promoting the Walkinshaw Performance brand.

Walkinshaw Racing CEO Craig Wilson told Speedcafe.com.au at the launch of the 2010 Bundy Red attack that the absence of direct Holden financial input will not hurt the Bundy Red team.

“Holden isn’t funding us this year,” he confirmed.

“That’s one reason for no branding, and secondly, the Walkinshaw business is growing rapidly and is now in a position to contribute to the team, and in return, get some sponsorship and advertising benefits. 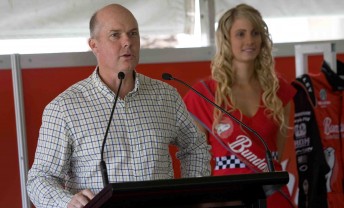 “It will hurt (not having Holden backing), but there are a number of teams who don’t have any Holden money this year. I think if you ask anybody, they’d rather have it than not have it.

“We’ve been able to make up the difference, more or less, and trim a few costs as well, which isn’t a bad thing. We’ll be right.”

A Holden spokesperson told Speedcafe that all Holden V8 Supercar teams in the Championship Series receive assistance from Holden, however, the level of input varies from team to team.

Expect TeamVodafone, Jack Daniel’s Racing, Supercheap Auto Racing and Garry Rogers Motorsport to continue to have Holden stickers on their cars this year.

The Bundaberg Red Racing team will be on track for the first time at the official V8 test at Winton Raceway on February 8. Wilson said that it’s been a busy off-season, however, all the team is ready to roll.

“We’re only testing in a couple of weeks, so to get this launch behind us is a big thing,” he said.

“We knew that it was going to be a short period between the last round (in Sydney) and now, so we we’re well underway. We’re fine at the moment. Some of the guys are still away on a break, but most of them are back next week and then we’re into it.

“The cars are pretty much ready to go – just a couple of minor things to do before the test, but we’ll be into it shortly.”

Wilson said that he wants to see his team challenge for podiums this year, which should lead to victories.

“I think that we’re certainly a chance to get victory this year – definitely podiums,” he said.

“That’s what we’re aiming for. If you’re challenging for podiums, you’re in with a shot at victory.”