Stewart quicktime and sixth in the feature race 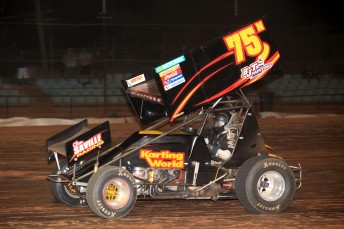 Glen Saville on his way to victory in the preliminary night of the Scott Darley $50,000 to win event. Pic: Paul Carruthers

Sydney driver Glen Saville started on the front row and took full advantage of every opportunity that came his way to claim the first feature race of his career at Parramatta last night.

“It’s a pretty good feeling to know I’ve beaten some of the best guys in the world, even more so when it is the first feature win of my career,” said Saville, who was seeded 22nd entering the two-night Scott Darley $50,000 to win event.

“I’m under illusions the front row start helped me but I when I was in the lead I had to put the fact that the other guys were behind me to the back of my mind.

Skip Jackson was the early race leader on the slick surface, however, when James Thompson spun in front of Jackson midway through the race it forced him to take evasive action. He lost a number of positions in the process before eventually crossing the line ninth.

Stewart followed this performance up with a second place finish in his heat race before running strongly in the feature race to record a sixth place finish.

“I probably guessed the wrong way in terms of set-up during tonight’s feature race but we learnt a heap for tomorrow,” said Stewart.

“It was a bit of trial and error tonight but I felt a lot more comfortable in the car than the last couple of nights. I set quick time and finished second in my heat race which was pleasing.

“The speed of the track tonight was a bit more to my liking and the race pace was slower on the slick surface, I enjoyed myself out there again and am looking forward to tomorrow’s final night.”