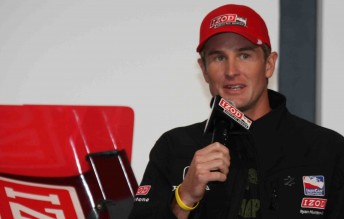 Ryan Hunter-Reay will drive for Andretti Autosport in the 2010 IZOD IndyCar Series in a part-season program.

The American will compete with sponsorship from IZOD on his No. 37 entry, joining regular team drivers Marco Andretti, Danica Patrick and Tony Kanaan.

The races that Hunter-Reay will compete in are still being decided, but he is assured an entry in the Indianapolis 500, plus races before and after the May 30 event.

The 2007 IndyCar Rookie of the Year said that signing with Andretti Autosport is a dream come true.

“Joining a team of Andretti Autosport’s calibre has been my goal for the entire 16 years of my racing career and being able to strengthen my ties to everyone at IZOD through this effort is tremendous,” said Hunter-Reay, who turned 29 recently.

“This is the opportunity of a lifetime and I am ready to give 120 percent to the program.”

“I have never met a group of people who are more determined to win races, and especially the Indianapolis 500.

“(Team owner) Michael Andretti is as hungry to win races today as he has ever been and it is an honour and a privilege to drive for the same person I looked up to as a young karter.”

Andretti said that there’s a chance that Hunter-Reay could compete in the entire IndyCar schedule.

“We are excited about what we’ve put together with PVH (Phillips-Van Heusen, owners of IZOD) and Ryan, and believe we can grow this program substantially over the next several months,” Andretti said.

“We felt it was important to announce what we know and what we’ve secured, which is a great partnership under the IZOD brand name and a program that we feel will give Ryan a good shot of winning at Indianapolis. How far we take him into 2010 is still in the works, but we feel good about the potential that we will add Ryan to our driver lineup for the full season.”