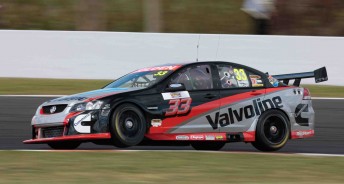 Greg Ritter and David Besnard teamed up to finish ninth in last year's Bathurst 1000 – but it could have been oh-so different!

Rogers told Speedcafe.com.au that David Besnard and Greg Ritter will return to his Holden team this year for the L&H 500 (Phillip Island) and the Supercheap Auto Bathurst 1000.

The signing of Besnard and Ritter to GRM ensures the squad of two fast and experienced men to partner Holdsworth and Caruso, which will never be more important, considering the new V8 Supercar rule that prohibits primary drivers from competing in the same entry at the September/October V8 enduros.

At Bathurst last year, Holdsworth and Caruso finished third, while Besnard and Ritter came home ninth (although that result could have been better for them – the pair led the race until an ill-timed Safety Car late in the race).

Rogers told Speedcafe today that having two tried and trusted endurance drivers locked away is a huge bonus for his team.

“We’ve already got Ritter and Besnard locked away,” he confirmed.

“They did a pretty special job for us last year, and I think as a team, we did a great job for them too, and they recognise that.

“They’ve both been around for various other teams and dealt with other people and I think they realise what we as a team are able to do.”

The ‘split’ endurance driver rule has caused a stir in the V8 industry and amongst fans. Rogers says that he will play by whatever rules are given to him.

“I don’t have a problem with the new rule,” he said.

“I think it will probably encourage better racing. I suppose it depends on the calibre of the other drivers that come along, but I think you’d have to say that there’ll be more cars in there with a chance of winning and making the top 10. It will make both the races more competitive.

“I know there are downsides for teams that have coupled up together, but either way, I don’t mind. I’ll race whatever the rules are.”

Garry Rogers Motorsport will feature a new look in 2010, having secured major sponsorship from Fujitsu General.