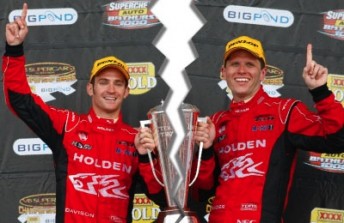 On December 10, the V8 Supercars board passed a rule that primary V8 drivers would not be allowed be paired together in the twin-driver endurance races at Phillip Island and Bathurst.

The announcement caused a huge stir in the industry and the greater public, evoking emotion that is usually reserved for ‘Ford versus Holden’ warfare.

Speedcafe.com.au started a reader’s poll on Dec 11 (the day that V8 Supercars confirmed the new rule), and after 2000 unique voters cast their thoughts, the result is almost a dead heat!

V8’s implemented the rule to force primary drivers to stay in their own cars, making teams find the best possible co-driver for their regular driver.

After the announcement, Tander was livid with the new rule.

“I can’t see the reasoning behind it. All I can see it doing is increasing the costs for everyone involved.

“It denies Will and I the opportunity to defend our title and we’re obviously very disappointed about that.”

Steve Owen, considered by many as one of the best V8 co-drivers in the country, said the new rule will increase the competitiveness of the endurance races.

“There are probably going to be 10-15 cars that can win, where in the last few years, there’s probably been three,” Owen said.

“The new rule, for me, means that I can go to Bathurst and realistically win the race. I think it’s the best news I’ve heard in the long time.”

Now, it’s your chance to continue to have your say. To cast your vote, CLICK HERE, or look at the Speedcafe Poll on the right hand side of this page.