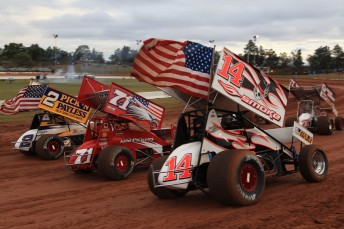 NASCAR Legend Tony Stewart will be back in action at Parramatta tomorrow night. Pic: Paul Carruthers

A late afternoon rain storm has forced the postponement of the opening night in the $50,000 to win Scott Darley race presented by Coca-Cola at Sydney’s Tyrepower Parramatta City Raceway.

A rain shower at midday caused a delay for the track crew but all was ready for the racing to begin as scheduled at 7pm, however, when rain fell again while competitors were completing hot laps it soaked the track surface.

Despite the best efforts of the 65 drivers in attendance, race officials and venue management to prepare the track surface for racing to begin, the track was determined too wet for racing at approximately 8pm this evening.

As a result of the postponement tonight’s scheduled events will be contested tomorrow Sunday January 3 with the final night to now be completed on Monday January 4.