Dollansky storms to victory at Warrnambool 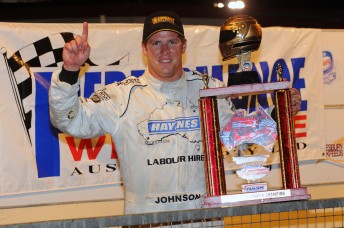 American Jason Johnson has claimed victory in the East Coast Pipeline Speedweek for the second time in his career.

Third place in last night’s final of five nights in the Speedweek was enough for Johnson to take the crown for the HM Racing outfit.

The Louisiana-native snared the win over fellow American Danny Smith, who is filling in at ADRAD Racing for the injured Trevor Green, and Brooke Tatnell – who was forced out of last night’s main event after officials deemed his car had suffered damage which made it unsafe for him to continue.

“To win Speedweek is a great feather in the cap for a brand new team,” said Johnson.

“All week long we’ve been running in a podium position, even when I got involved in the altercation at Avalon I was running second. This proves to me that we had good speed all week long so it is good to finish transfer this speed and consistenly into the win.”

World of Outlaws star Craig Dollansky found his way past the Orrcon Steel-backed driver Robbie Farr late in the race to claim the victory last night at Warrnambool’s Premier Speedway, round eight of the 2009/2010 Performance Wholesale World Series Sprintcar Championship.

Johnson came home in third place ahead of Smith and Steven Lines.

Championship contenders Tatnell and Max Dumesny both failed to finish last night’s main event allowing second placed Farr to close the gap to the top of the points table.