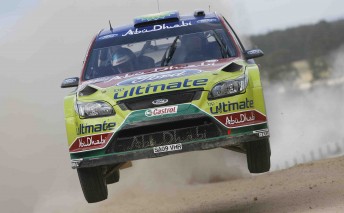 "The bottom line was that Rally Australia is a great event, but it was in the wrong place"

The 2009 edition of Rally Australia will go down in the books for many reasons.

Firstly there was the return of the World Rally Championship to Australia for the first time since 2006. It was the first time that the east coast of Australia had seen the WRC. Around 70,000 headed out to watch the stars of the WRC. Rally winner Sébastien Loab (Citroën) was relegated to second place behind Mikko Hirvonen (Ford) after a technical infringement in post-event scrutineering. However, all of this was overshadowed by overzealous protesters that not only put them offside with rally supporters but also split the local community on the far north coast of New South Wales.

Mention the name Nimbin and most people will tell you it’s Australia’s ‘Hippy’ town. So just why organisers put together an event that not only had a stage literally on the doorstep of the township, but also had crews transporting along a road linking Murwillumbah and Kyogle, via the Nimbin turn-off, every day was something that had plenty of people scratching their heads.

The protesters claimed before the event that the rally cars would kill scores of wildlife, damage the ozone layer and even spoil the water systems. Big claims that all became unfounded when research (approved by the NSW Government and local residents) concluded that the weekend of the rally claimed less wildlife than any other weekend and the damage to the environment was nonexistent.

The bottom line was that Rally Australia is a great event, but it was in the wrong place. Take it to an alternative region that appreciates the many millions of dollars in economic benefits, and not a place where ‘alternative’ means just that! Sorting out these issues will take time. Fortunately the next Rally Australia is not set down until 2011.

As far the rally itself, it was a great battle between Loeb and Hirvonen. Loeb had started the year on a charge winning the opening five events to hold what appeared to be an insurmountable lead in the title chase. The season then got turned on its head when Hirvonen got back in the hunt. The Finnish star won three events on the trot heading to Australia, and he came to the NSW far north coast with a three-point lead in the driver’s standings and the event favourite.

Loeb and Citroën are the masters of ensuring they always have the best road position. In fact Loeb was never the first car on the road throughout the event. This provided him with a swept road which he took full advantage of. He attacked when he needed and paced himself for the rest of the event. Along with co-driver Daniel Elena they stood on the top step of the podium in Kingscliff, but they were soon exchanging trophies with Hirvonen and Jarmo Lehtinen after post-event scrutineering. A discrepancy in the anti-rollbar links was the issue and Hirvonen had extended his lead in the WRC standings to five points.