Schatz picks up where he left off in Oz

Schatz picks up where he left off in Oz 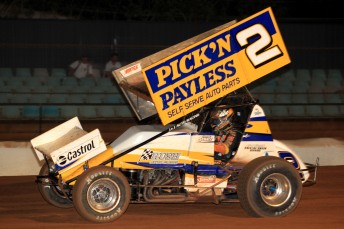 Driving the Garry Rush-owned Pick’n’Payless entry Schatz started the main event from sixth position but it wasn’t long before the American began to assert his dominance on the 30-lap main event.

A series of stoppages in the opening laps slowed Schatz’s run to the front of the field from his sixth starting position, however, once he hit the front he was never headed on his way to victory.

“I’m glad to be back, mother nature didn’t co-operate last night and we here tonight, we got a great race in and glad to get the win,” said Schatz.

Brazier was on the charge late in the race and was closing in the rear of Schatz’s Pick’n’Payless entry but he was forced to settle for second place behind the American star.

NASCAR legend Tony Stewart continually adapted to his return to the dirt track in a Sprintcar throughout the evening before coming from the rear of the man event to finish seventh.

“I think to finish seventh from the tail was ok, it was a good first night for me, obviously not as good as my team-mate who won the race but he runs 100 races a year and I get to run three,” said Stewart.

“I don’t know how many days it is until we run again but I can’t wait for it.

“I’m a little tired tonight, it is a set of muscles that I don’t use very much but I had a blast.

“The rain really hurt the racetrack, it was hard, with the rain that we got over the last couple of days it was bound to make the track a little messy but I think everybody did a pretty good job considering the conditions.”

The American trio of Schatz, Shaffer and Stewart will all be back in action in two days time at the Sydney venue when they battle for the Hogs Breath Sprintcar International.