Johnson powers to victory at the Bridge

Johnson powers to victory at the Bridge 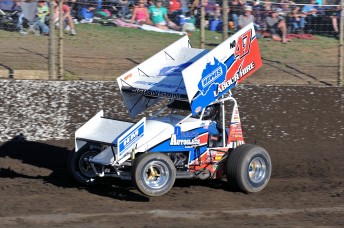 American Jason Johnson powered his way to victory during the second event in the East Coast Pipelines Speedweek, round five of the Performance Wholesale World Series Sprintcars Championship, at Murray Bridge in South Australia tonight.

After finishing runner-up in the corresponding round in 2008, courtesy of a hard charging drive from the rear of the field, Johnson went one better this year by returning to the winner’s circle.

“It is great to get another win, I missed the opening round of the series but to have won two out of the four rounds I have contested with my new team is great, really, what else could you ask for?” said Johnson.

Finishing second behind Johnson in the main event was fastest qualifier Robbie Farr in the Orrcon-Steel backed entry.

Farr crossed the line less than half a car-length ahead of a fast finishing Max Dumesny. The seven-time series Champion qualified a lowly 22nd and had a disappointing run through his heat races before charging his way from ninth place at the start of the B-Main to claim the final spot on the podium.

The heat races were marred by several incidents, none more spectacular than David Murcott’s exit into the turn two catch fence after contact with local driver Ryan Jones.

Competitors will now head to Mount Gambier in the state’s South East for the next round to be held tomorrow night (December 28).