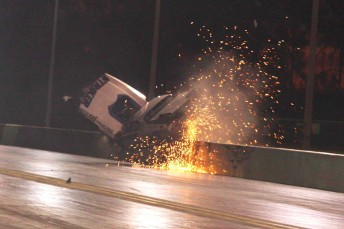 Heading into the 2009/2010 ANDRA Pro Series season opener at Willowbank Raceway in August, John Zappia had been marked as ‘unbeatable’.

With an undefeated 2008/2009 season behind him to see his second consecutive Top Doorslammer Championship Trophy proudly on the shelf, combined with a habit of consistent ‘five second’ passes – many a competitor could be heard to label the West Australian as practically untouchable.

Zappia insisted in the lead-up to August that this wasn’t the case – his team was simply prepared and consistent, and in a eerie twist of fate, that August weekend would see him receive the first major dint in his armoury in recent memory with a spectacular crash which would be shown again and again across television screens both in Australia and internationally.

Lining up against Maurice Fabietti for the final, Zappia was in the left hand lane and struck trouble soon after his launch, with severe tyre shake moving the car towards the left wall, and then being turned hard right towards the opposite wall when the left hand tyre ‘grabbed’ the track.

When the Striker Crushing and Screening Monaro struck the right hand wall it did so at a 45 degree angle and approximately 100 miles per hour, riding sideways up over the wall and turning so the back rear tyres touched the top of the wall before the car returned to skate along the track on all four wheels and come to a stop hard up against the right hand side wall at the 1000ft mark.

“I am counting my blessings at the moment,” said a relieved John Zappia at the time.

“The rear wheels on the Striker Monaro have one axle connecting both rear Mickey Thompson tyres, so when they have different traction left to right the car wants to turn violently in a right angle direction. I caught it quickly, but the car had the momentum up and ended up on two wheels.

“I thought it was going to be worse than what happened when I was facing the wall ahead at 100 miles per hour. Fortunately the car was at an angle and on two wheels, so it was a glancing blow and rode the wall without going over.”

Zappia was completely unhurt in the incident, and within minutes was planning the rebuild of the car ready for Sydney’s Nationals event on September 11 – the next scheduled event for the team.

With the team left contemplating the massive damage to the championship winning car, fans could have been forgiven for thinking the team’s competitive streak could be in danger, with ‘Zap’s Rat’ apparently destroyed and the team obviously shattered.

That wasn’t the case though, and just five weeks later the team showed up in Sydney, qualified third fastest and went on to become equal leaders of the championship chase with one of the quickest side by side passes in history against fellow West Aussie Robin Judd in the final.

“We are just thrilled to have done so well at this event,” said a cheerful Zap after the Sydney final.

“To make runner up at this event after rebuilding the car and missing out on any testing opportunities, is a good achievement. I lost that final against Juddy with a slow reaction time, and his 5.857 to our 5.870 was as close a Top Doorslammer final as you could get, and we are now equal leaders in the ANDRA Pro Series with Robin.”