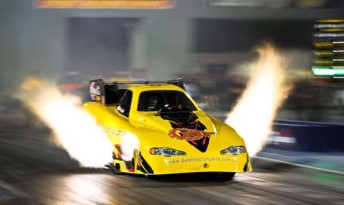 Perth’s Boxing Day Nitro Funny Car Challenge has seen the quickest and fastest side by side Nitro Funny Car pass in Australia and the country’s first 500kmh pass overnight.

The first hour of racing saw both marks reset, with Damien Harris and Mark Sheehan recording the quickest and fastest side by side Nitro Funny Car pass in Australian drag racing history, when Harris beat Sheehan on a hole shot with a 5.04 second pass at over 499kmh to Sheehan’s 4.99 second pass at 479kmh.

The passes were also history-making for the venue, as the two quickest at the venue, as well as the first four second pass and the first 300mph pass for the West Australian facility, although the new track records did not stand for long.

Also having the crowd enthralled over the traditional racing occasion were Shane Weston in Top Comp, who recorded the youngest ever five second pass at 17 years of age, with a 5.9 second pass aboard his 2,500hp AA/Dragster, before backing up with a 5.87s later in the evening.

The next major drag racing event for Perth is the ANDRA Pro Series Top Fuel event over January 8 and 9, while Nitro Funny Cars will make their next appearance at Queensland’s Willowbank Raceway over January 2 and January 16 for the USA vs AUS Nitro Funny Car Challenge, as part of the International New Year Series.

In other drag racing, New South Wales’ Western Sydney International Dragway was to hold a Boxing day Jet Dragsters event, however wet weather has seen that event postponed, with a new date in January expected to be announced shortly.