AJ: Schumacher will still be the best

AJ: Schumacher will still be the best 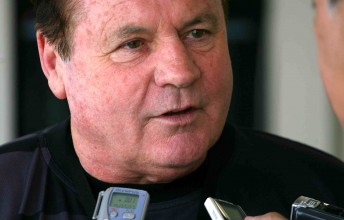 1980 Formula 1 World Champ Alan Jones says that Michael Schumacher will be able to contest for the title next year, despite being out of the sport for three years

Australian Formula 1 World Champion Alan Jones says that Michael Schumacher will still be “10 percent better” than the rest of his F1 rivals, despite the fact that the German champ has been on the sidelines for the past three seasons.

Jones spoke to Speedcafe.com.au today to comment on Schumacher’s confirmed return to Grand Prix racing – the sport he dominated for over a decade.

Schumacher has not contested an F1 race since the season finale at Brazil in 2006, but Jones says that Schumacher will quickly find his way – and is likely to challenge for the title next year.

“I don’t think the cars have altered, quick frankly, from when he retired,” Jones said.

‘AJ’ says that Schumacher’s clear enthusiasm for the sport – and winning – will mean he has a great chance to succeed.

“As long as the degree of enthusiasm and the want is still there, I think that’s the main ingredients.

“When I came back, I was in a very uncompetitive car which didn’t help, and as soon as I realised the car was uncompetitive, I lost a lot of enthusiasm towards it.

“Excuse the pun, but Michael’s ‘need for speed’ is still there. He’s proven that by competing on motorbikes and go karting and all that. His enthusiasm for the buzz or the thrill is still there and that’s the most important thing.

Jones says that the fact that he’s turning 41 in a few days (January 3) won’t be a factor – even though he will be more than double the age of some of his rivals in the F1 field.

“I don’t think that will be a factor,” he said.

“It gets back to your personal fitness. Certainly, his fitness and agility is probably better than anyone.“