Advertising restrictions no barrier for DJR

Advertising restrictions no barrier for DJR 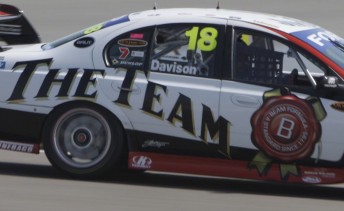 'The Team' will remain for Jim Beam Racing in the Middle East next year, but the rosette will be replaced the Prostate Council's blue ribbon

Dick Johnson Racing is likely to promote the Prostate Cancer Council of Australia on the doors of its Jim Beam Racing Falcons in the opening two rounds of the V8 Supercar Championship Series in the Middle East.

Due to the strict alcohol advertising restrictions in Abu Dhabi and Bahrain, DJR will replace the words ‘Jim Beam’ with ‘The Team’ (similar to what it did in the category’s past adventurers to the Middle East), however, it is expected that the red Jim Beam rosette will be replaced by the Prostate Council’s blue ribbon.

Dick Johnson Racing’s commercial director Glenn Turnor told Speedcafe.com.au that the team is still working out the details of its Middle Eastern trip.

“Starting the year with two rounds in the Middle East is pretty tough, so we’re working with Beam Brands and V8s to find the best outcome,” he said.

“We’ll probably use the words ‘The Team’ replacing Jim Beam, as we did in Bahrain for the past two years, and in conjunction with Beam

Brands, we are probably going to be promoting one of its charities – the Prostate Cancer Council of Australia, so we’ll actually run the Prostate blue ribbon logo replacing the Beam rosette.

“At this stage, and things change, but we’ll probably run that livery at both Abu Dhabi and Bahrain.”

The advertising restrictions have placed on all alcohol teams (Jim Beam Racing, Jack Daniel’s Racing, Bundaberg Red Racing and The Bottle-O Racing) comes at a considerable cost, considering the uniforms, crew suits and race suits that have to be changed to disguise their regular sponsorship arrangements.

V8 Supercars and the affected teams are currently working through a package that will see them receive a one-off financial assistance to cover the uniform costs.

Jim Beam Racing’s Falcons will be campaigned in 2010 with red and gold highlights, similar to this year, just with some slight differences to the 2009 livery. The team is likely to launch its association with the Prostate Council in mid-January, but will hold off on any official team launch until the week of the Clipsal 500.