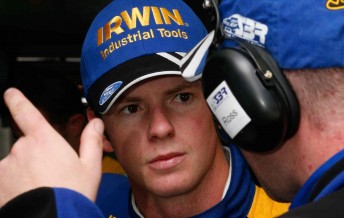 Daniel Gaunt will drive for Lucas Dumbrell Motorsport in 2010 – and it all started with a message on Facebook.

Gaunt contacted the newest V8 Supercar team owner via the popular social networking site last week, and now, the pair will team up for their first full-time crack at the V8 Supercar Championship Series.

The New Zealander will compete in #30 Commodore VE – the Walkinshaw Racing chassis that Garth Tander took to championship victory in 2007.

LDM has secured Gaunt’s services in a multi-year deal, as well as sourcing major sponsorship from Gulf Western Oils.

”He’s a young guy and he’s never been given a good chance, so I’m happy to provide that for him,” Dumbrell said.

“I’m in the game for a long time, so I figured I should start with a driver I can work with in the long-term.

“We’ve got realistic expectations for our first year, but there’s no doubt that by the mid-point of the season, we won’t be hanging around the back of the field.”

Gaunt will get his first drive of the Commodore VE in a hand-over day at Winton in late January before his first full-blown test during the V8 Supercar test day at the same track on February 8.

Gaunt, 24, who has driven two solo V8 rounds with Team Kiwi Racing in 2008, plus last year’s endurance races with Stone Brothers Racing, was pleased to have secured his first main ride.

“It’s a great opportunity,” he said.

“It’s great that Lucas has given me this chance. I’m just an ordinary guy with an extraordinary chance.

“The equipment is great, and it’s proven. It’s all Walkinshaw Racing gear – engines, the whole package. It will be the best V8 Supercar I’ve ever driven. Lucas has assembled a great team, so bring it on.

“Main Series V8s is extremely challenging, but we’re all up to it.”

Gaunt drove in six of the seven Fujitsu V8 Supercar rounds this year, finishing fifth, despite missing the final round at Sydney Olympic Park.