Pieces of the Brad Jones Racing’s expansion puzzle continue to fall into place, with confirmation that renowned engineer Phil Keed will join the team in 2010.

Keed has recently been working with Ford Performance Racing but has left the factory Ford team last week, bound for the expanding BJR squad.

Although not confirmed, the Albury-based team will run three cars in 2010 for Jason Richards, Jason Bright and Karl Reindler.

It could be expected that Keed would engineer Bright’s car, as the two already enjoy a solid friendship – professionally and personally. Keed and Bright worked together at PWR Racing (2004) and FPR (2005/06). 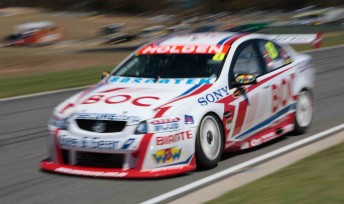 Team owner Brad Jones will not comment on the total structure of BJR’s future until its official launch in late January, but he did confirm to Speedcafe.com.au that his team had secured the services of Keed for 2010.

“Phil’s been in the game for a long time and is clearly a well established engineer,” he said.

“I think he’ll add to our mix here at BJR. We’ve got a fantastic engineering staff and Phil’s addition will only strengthen that.

“We’re going to make our announcements in January on who is driving our cars, and it will be all sorted then.”

While Jones would not publically announce his drivers, he is certain that the changes the team has in store will improve its fortunes.

“Two years ago when we were finishing our relationship with Ford, we were probably last in the team’s championship, and when I decided to retire, we decided to restructure the whole place and move forward as rapidly as we possibly could,” he said

“All the changes you’ve seen between now and then have been designed to achieve more and more success.

“This is just another piece of the puzzle in evolving and trying to get to the front of the field.

“We’re going to be very strong on the driver front next year. We’ve got some fantastic engineering influences here at BJR and we’ve got some really exciting things happening. When the picture is clearer and we’re ready to announce it,

Current lead engineers at BJR, Wally Storey and Matthew Boniface, will continue with the team in 2010.