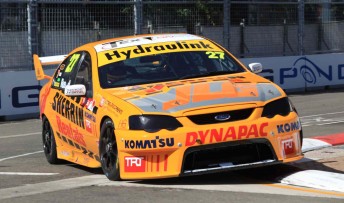 Ford stalwarts Howard Racing is considering switching to Holdens in 2010

Having competed in the series since 2002 solely in Fords, the Mark Howard-owned team is currently working through a commercial arrangement that would need to see the Gold Coast-based team ditch its Falcon chassis and enter a Holden Commodore.

Team manager Warren Davis said that the chance of a chassis switch is real.

“It’s definitely an option,” he said.

“What I’ve got is still good stuff, but it might be time for a change. We might even end up running one of each – or two of one and one of another.

“It’s just a matter of seeing where all the balls fall. Having a Commodore is definitely a consideration and something that we’re chatting to people on. It could happen, if things come off the way that we’re talking.”

Davis says he wants to have the deal sorted as soon as possible.

“I want it done by mid January, hopefully,” he said.

“There’s a fair bit going on, but as of the end of this week, everyone goes into shut down mode. Things still happen, but not with the intensity that things happen before or after Christmas.”

Howard Racing driver David Russell finished third in the 2009 Fujitsu V8 Series. The team’s best result in the championship was in 2006 when Adam Macrow won the title.