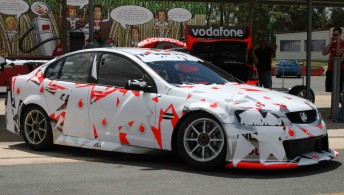 The VE Commodore, earmarked as the team’s ride car, was given a shake down at the Ipswich circuit, sporting the TeamVodafone’s 2010 livery, disguised in appropriately-placed stickers.

Whincup, the recently-crowned back-to-back V8 Supercar Champion, told Speedcafe.com.au that the team has worked night and day to get its new Holden race cars ready for the start of 2010.

“We went testing today in our brand-new Holden – our ride car,” he said. 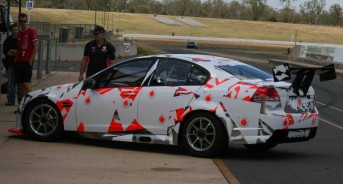 The stickers placed in appropriate positions around the TeamVodafone Holden disguises the Commodore's true identity ...

“We’ve been putting in huge hours getting this car ready. Although I’m still in celebration mode, it was good to get a start on 2010 today.

“We don’t want to confirm our livery yet, hence why we’ve covered it up in stickers.

“Underneath, the livery is genuine, so we covered it up. As you can see, we’ve left a little bit here and there as a teaser. It’s a sneak peek for the fans on what 2010’s going to look like.”

While Whincup can enjoy the next few months as the V8 Champion, he says there hasn’t been much time to take it all in.

“The only day I’ve had since to wind down was Alex (Davison’s) bucks party (Saturday). That was the only real opportunity I’ve had to celebrate,” he said.

“I’ve been pretty busy. I left to go down to Sydney on Tuesday before the meeting, and only got back last Friday night.”

With the team’s first Commodore tested, Whincup can now enjoy the Christmas and New Year period. He will drive his newly-delivered Holden wagon from his Gold Coast-base to his family in Melbourne.

TeamVodafone will officially launch its livery in early 2010.

In other Queensland Raceway news, Triple Eight handed over its ‘chassis #15’ to Dick Johnson Racing’s new recruit Jonathon Webb. The car completed the maximum 10 laps as part of the hand over to its new owners.