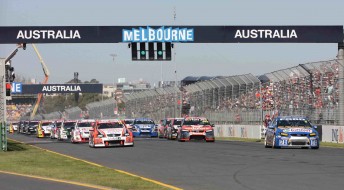 The support categories for the 2010 Formula 1 Australian Grand Prix have been confirmed.

The V8 Supercars will return to the Albert Park track for a non-championship round. According to Speedcafe sources, there is no chance of V8s getting its own pit-lane next year, meaning that three shorter races will be run. One thing that is for sure, though – the ‘Manufacturers Challenge’ will will be dumped after two uninspiring years.

Also on the grid at the March event will be Australian GT, Formula Ford and MINI Challenge – all contesting rounds of their Australian championships and series. The final category on the bill is New Zealand’s ever-popular Formula 5000. The F5000s will contest the final round of their Tasman Cup Revival Series

The Australian Grand Prix will run at the Albert Park street circuit on March 25-28.