Tasman gone, but the ashes remain

Tasman gone, but the ashes remain 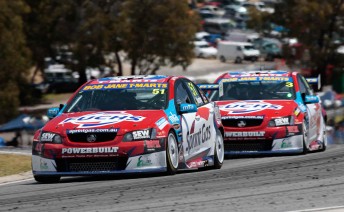 Tasman Motorsport may be gone, but the ashes of the team will still be evident within the V8 Supercar ranks.

When Tasman Motorsport set itself up three years ago to become a totally independent V8 Supercar constructor, a lot of money was spent on the engine shop, CNC machines, fabrication, sub assembly and damper infrastructure.

Now, all of that equipment is the property of GMR, and according to team manager Dean Lillie, he says “we’re basically a Main Series team running Fujitsu Series cars.

“In terms of infrastructure, we’d have to be the most well-equipped Fujitsu team.”

Equipment-wise, GMR has a ‘tick’ next to its name. Now it’s time to secure drivers capable of using the gear to its fullest potential. Three Fujitsu seats are available at GMR – two in the current Sprint Gas Commodores and one in the VE that Sam Walter and Taz Douglas drove at Bathurst this year.

Lillie says that winning races and the championship is the only aim for his team.

“We need drivers who can win races, and you need to win to have credibility,” he said.

“I’m on the hunt for a driver that can win races, and if we struggle to fill the seats, I’ll consider putting a gun in for Clipsal to prove the car and team’s worth.

“Their good cars and they’ve got good engines. The Tasman cars never suffered with straight-line handling. For us now, it’s a matter of finding the right drivers to mix in with the good team of blokes that we have here.”